Androscoggin Greenway – Rail to Trail from Lewiston to Lisbon Falls

The development of a major portion of the off-road section of Inland Route of the East Coast Greenway gained policy support from three Maine communities over the last two months.  The Town of Lisbon, along with the cities of Lewiston and Auburn, have passed a shared resolve endorsing the public acquisition of the Lewiston Lower Rail line.  The nearly 13 mile segment targeted for acquisition would be converted to a trail that links the historic mill district in downtown Lewiston to Lisbon Falls Village along the Androscoggin River.

At the southern end of the proposed new section, the Town of Lisbon has been diligently implementing their riverfront trail plan, including a new section under construction now to link their Papermill Trail along the Sabattus River south to Lisbon Falls Village along the Androscoggin.

A workgroup staffed by ALT was established in 2013 to work on this project with representatives from recreational user groups, a local Bicycle-Pedestrian Committee, and city and town staff. 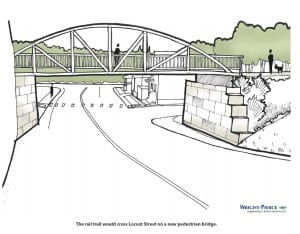