L-A’s new ‘Museum in the Streets’ 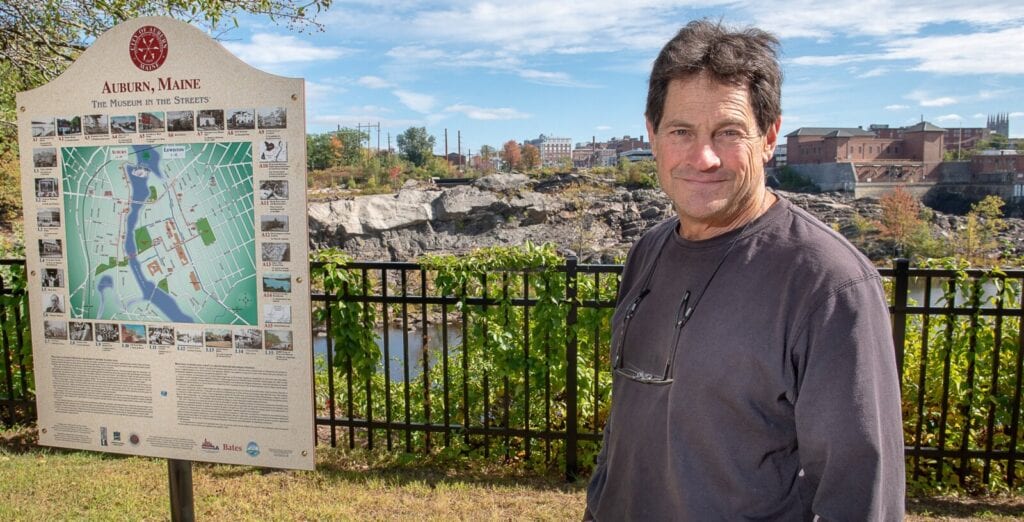 LEWISTON — Two years ago, Peter Rubins and a team of local collaborators already had plans for a walking history trail that would span both sides of the Androscoggin River. The only problem was they did not have a funding source. By next month, a series of 32 “Museum in the Streets” historical panels will be installed at multiple locations spanning the two cities — 15 each in Lewiston and Auburn, with two introductory panels.

The signs start at the West Pitch in Auburn, head down the walking paths, travel across the river to Lisbon Street in Lewiston, and loop back to Veterans Memorial Park. Auburn’s signs were installed last week. Lewiston’s are set to go in next month. With some convincing, the funding eventually came from both cities, which split the cost to have the Maine-based company create the signs. But while the cities paid the bill, those involved said it was a large team effort led by a tireless Rubins. And as chairman of the Grow L+A river working group, Rubins has other plans in store. “We feel like the river is the reason Lewiston-Auburn exists and that it could be a draw for people to come visit the falls, walk the path and see it as more recreational,” he said. Rubins said similar things during a Lewiston City Council meeting last week, where he updated officials on the walking history trail. He plans to provide a similar update to Auburn officials this week.

“Where else can you see falls like that without going to Niagara, or driving 10 miles and hiking five,” he said. “He’s the one who really pushed for it,” said Rachel Desgrosseilliers, founding executive director of Museum L-A, which assisted with the project. “We knew it was going to be a big effort. It was good to have a project director to keep us on a straight path. Without that, this could not have happened.” While many would like to credit Rubins for leading the charge, the list of collaborators is impressive. It also includes the Androscoggin Land Trust, Androscoggin Historical Society, Healthy Androscoggin, Bates College and staff from both cities.

Desgrosseilliers said a Museum in the Streets project was eyed eight to 10 years ago, but funding was always the barrier. At least 10 other Maine municipalities have installed Museum in the Streets signs, including Augusta. She said Museum L-A staff, particularly Kate Webber, lent a hand in crafting the stories on each sign, which had to be pared down. “We had too many stories to tell,” she said. “I always tell that to people here. We could work at the museum 50 years and we’d never run out of great stories to tell about the community.”

Shelley Kruszewski, executive director of the Androscoggin Land Trust, said the Museum in the Streets route provides a connection between the downtowns of both cities and the river. “It provides people with a great opportunity to get some fresh air and exercise, explore the area and learn about Lewiston and Auburn’s rich history and relationship with the Androscoggin River all at the same time,” she said. “The river has made a remarkable recovery in recent decades, is inextricably linked to the histories of Lewiston and Auburn and is a central feature that is enjoyed by both cities for recreation and education, and it is great to see it highlighted through this project.”

The above is an excerpt of an article written and published by the Sun Journal. Read the full article, originally published on October 6, 2019, under the title, “Kudos: The people behind L-A’s new ‘Museum in the Streets’” on the Sun Journal website: https://www.sunjournal.com/2019/10/06/kudos-the-people-behind-l-as-new-museum-in-the-streets/